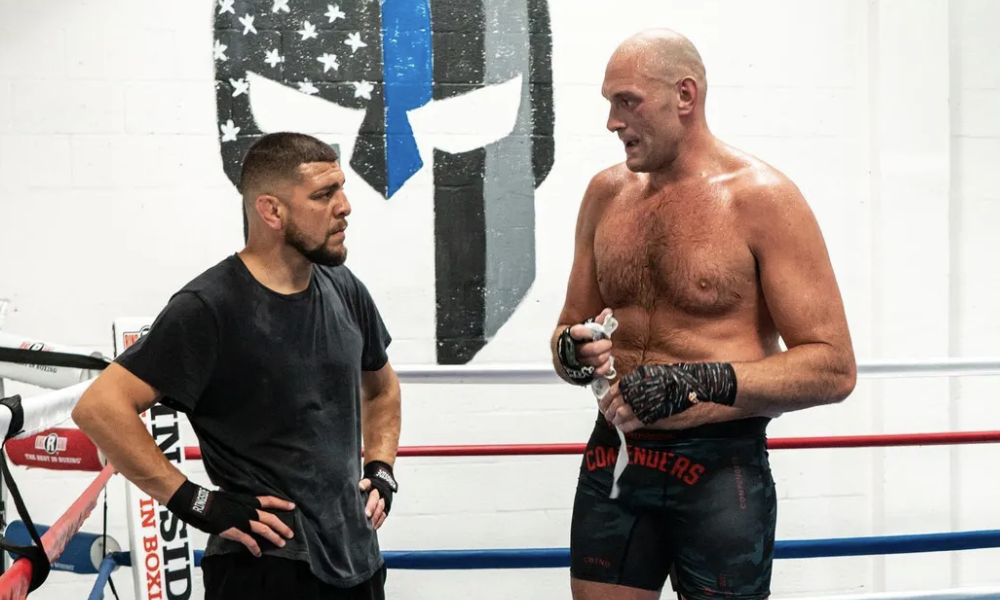 The 2-time heavyweight world champion Tyson Fury recently announced his early boxing retirement after his 6th round TKO win over Dillian Whyte. His victory took place back in April 2022 in a packed house of 94,000+ fans which took place at the Wembley Stadium in London, England. At just 33 years of age, Fury’s undefeated boxing record still proves to the world that he still has a lot more fight in him. He has been recently hinting a potential crossover to mixed martial arts due to all of the politics that he believes are preventing him from fulfilling his legacy.

MMA is obviously not an easy switch but it doesn’t look like that’s stopping him from expanding his fight game as we recently spotted him hitting the bags and grappling with former UFC fighter and Cesar Gracie BJJ black belt Nick Diaz.

Fury has always been a bigger fan of boxing over MMA as he told talkSPORT recently that in his world, when a fighter falls to the ground, it is only fair to allow your opponent to stand back up.

“No, I’ve got no real interest in grappling up and down on the floor and all that sort of stuff. I’m a stand-up fighting man, I don’t wrestle up and down and grab each other’s arms and sit on each other and all that. I’ve no interest in all that stuff – I like to stand up and fight so would I ever compete as an MMA fighter? Hell no! Would I compete with small gloves on in a cage in a fight? Yes. But no gripping and grappling. When a man goes down, you get in and give him a ten count and let him fight on if you can. That’s how we fight, that’s how it’s been going on for thousands of years.”