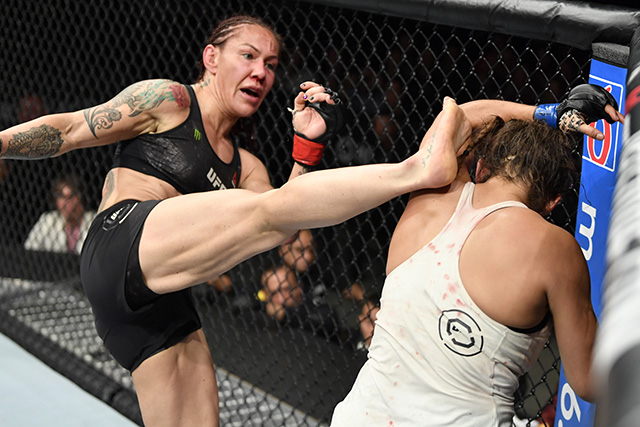 Cris Cyborg is coming off a unanimous decision victory over Felicia Spencer this past Saturday in Edmonton, Canada. She completed her last UFC fight on her contract with a win, bouncing back from a loss to Amanda Nunes — a defeat she’s never tasted since her MMA debut 14 years ago.

Now that her UFC contract needs to be renewed, there’s two things on her mind that’s making her ponder the idea of re-signing an extended deal. First, she’s made it clear that she wants an immediate rematch with Nunes, but White has apparently danced around her request.

From Cyborg via ESPN:

“I look in his eyes and I shake his hand and I say, ‘Why are you lying? I texted your phone after the fight. I want my rematch,’…and then I said, ‘Why are you doing this? Why?’. He didn’t have words. There were a lot of cameras there, too.”

She went off to mention that although she wants a rematch with Nunes, Cyborg has been clearly uneasy with UFC President Dana White’s remarks about her in live interviews. Over and over he has been bullying her about her physical appearance, which mentally abused Cyborg and her family throughout the years — still to this day.

“Who wants to dispute that she didn’t look like Wanderlei (Silva)? She got up, walking up the stairs, jacked up on steroids beyond belief and looked like Wanderlei Silva in a dress and heels.”

Cyborg has responded to Dana White’s bullying, demanding the apology she deserves:

“Of course, he has to apologize. I think he has family, he has kids. I don’t know if he has a heart, but I think one thing he’s doing is not just touching me, because he doesn’t like me. He’s touching the people around me, he’s touching my family. It’s not right. I’m suffering bullying. Where is the code that you don’t do this? He is the boss. How does the boss make fun of your athlete?”

Should Dana White apologize for his harsh words that many consider a verbal abuse from boss to employer? Are you looking forward to a rematch fight between Cyborg and Nunes? We’d love to hear your thoughts in our Comment section below…