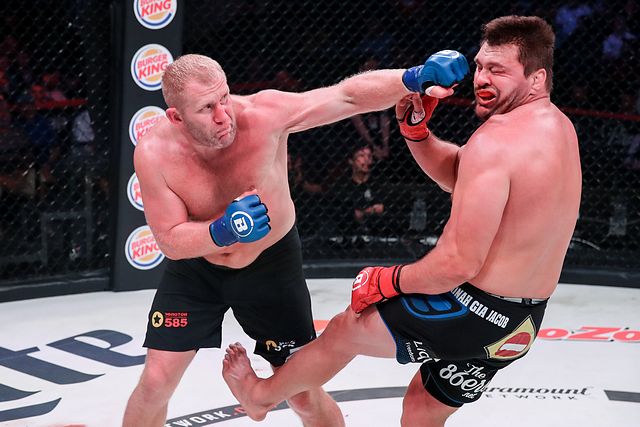 Bellator Heavyweight fighter Sergei Kharitonov didn’t waste time in putting Matt Mitrione into some uncomfortable situations from the very start of the main event fight. It was clear they were both going out to throw bombs, but it got to the point where Mitrione’s mouthpiece just kept falling out every time the “Paratrooper” went for a swing. Mitrione complained several times about the mouthpiece, but there was simply nothing referee Dan Miragliotta could do. The mouthpiece situation clearly affected Mitorione mentally and it was all downhill from there. Kharitonov TKO’d Mitrione in the second round to take home the victory this past Saturday night at Bellator 225.

Colombian MMA female fighter Alejandra Lara moved up from Flyweight to Bantamweight to TKO Taylor Turner in the first round. Lara looked to be a lot more comfortable in the 135-pound weight class, picking Turner apart every step of the way. It will be interesting to see who will be next to face this young promising South American talent.